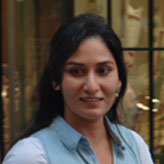 A National level Basketball player herself, Hitha believes that sports teaches numerous life skills and inculcates discipline, hardwork, team spirit and many other important values in young children. She has always encouraged her own children to take up sport. Touring nationally and internationally with her son over the past 6 years, she has personally experienced the commitment and sacrifice that goes into making a player. She has been witness to the vast amount of talent in India that is being untapped due to insufficient funds and other forms of support including counseling and mentoring. She strongly believes in doing her bit for Indian sport.
Hitha has volunteered at various organizations including Nachaketh Tapovan (a school for underprivileged children) , ILP ( Indian Literacy Project) and SPOT (an initiative formed by parents of junior tennis players). She is also the co-founder of a company Indian Memories  that encourages and promotes various arts and crafts of Andhra Pradesh. She hails from a business family and is the wife of Mr. Naveen Reddy who is a founder of a real estate company.